Where I End and You Begin – Radiohead 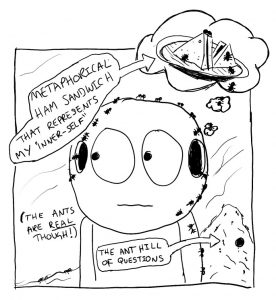 The ADHD brain goes where it pleases. I have very little control of the meanderings of my stable-state brain and as a result my actions can sometimes surprise even me. I always assumed that this was just ‘me’, after all what are we other than how we behave? Then I was diagnosed with ADHD and all that got called into question. When you get diagnosed with something like ADHD a tonne of questions come flooding in like ants into a picnic basket and crawl around the crevices of your consciousness demanding to be swatted lest they eat the ham sandwich of your inner-self. If ADHD suppresses my impulse control, what does that say about my free will? What the hell even is free will (I may tackle this at another point)? Which of my personality attributes are ‘me’ and which are symptoms of my chronic neurological disorder? What does ‘me’ even mean (another one for the backburner)? Do I get to feel less shame about stupid stuff that I’ve done? Can I still take credit for the awesome stuff that I’ve done when some of them were obviously the result of ADHD? What the hell is going on?!

There are some weighty questions there, and ones that concern every human being (if only notionally for many people) and one presumes other sentient beings. These Questions are too weighty to cover in anything less than a car weighted treatise, so I’ll try and tackle a slightly leaner question – where do I end and consequently where does ADHD begin?

The thing is, ADHD affords me a few superpowers – a very broad knowledge base created by my ever wondering attention, the ability to make obscure connections, outspokenness (even when not necessarily welcome), a rabid, insatiable appetite to learn, boundless energy, and many others. There are, of course, flipsides to all these which are far from ‘super’ and various other residual difficulties that I won’t burden you with – I could take either case to make my point, but let’s stay positive eh? My superpowers have lead me to do lots of interesting and wonderful things, but some of these are clearly a direct result of classic ADHD behaviours. So if you discount all of that what is left that I can feel proud of? What exactly is left of me? If you could treat all the ADHD away what would I be left with?

It’s a theme I’ve tackled alone, and with others, on many occasions since I had my diagnosis. It’s not often that you get told that the features by which many that know me (including myself), those that friends and family would most strongly associate with Alex-ness, are symptoms of a neurological misconfiguration. It’s also an (unfounded) worry when you first start to take medication – will I suddenly stop being me and metamorphose into some dull automaton? I don’t think I’ve quite got to the bottom of it, indeed I don’t think you can without tackling the “what is ‘me’?” question, but I think I’m in a reasonably sure state of mind on it. It goes a little something like this.

There are all kinds of brains, and every degree of paisley patterned, technicoloured gradiation between them, but various notable edge cases emerge within the spectrum of broadly normal brain (by which I mean excluding brain damage and profound brain disability etc.). Some of these are ADHD, Autism Spectrum Disorder, Dyslexia and Bi-polar to name a few. Broadly speaking, people with these conditions (at least, the lucky ones that aren’t at the extreme edges) can cope reasonably well in society and rarely get singled out as in any way different. You could describe the difference between the ADHD/Neurotypical/ASD/Dyslexic brain as like the differences between computer operating systems like Windows vs Mac vs Linux – they all do roughly the same thing but have different strengths e.g. Windows is better for productivity, Mac is creative and Linux is for going deep. All the similarities are there though – windowed applications, mouse/trackpad control, random rebooting and missing files – but experiencing one tells you only a certain amount about experiencing any of the others. If you’ve only every used Windows, jumping on to a Mac will feel reasonably familiar for about 10 seconds, until the moment you try and do anything meaningful, at which point you will feel very much like you are losing your mind. The situation is worse with brains since you can only ever get to try out your own, or some version of it (you might try to hack the ‘OS’ with some drugs, or do an upgrade via a midlife crisis). From an objective perspective ADHD can only ever be observed and never experienced. The neurotypical brain is just as big an experiential enigma to me as my brain is to a neurotypical person, as is an autistic or dyslexic or colour blind brain to me and Madame Nuerotypical. Yet we find ourselves, as humans, philosophising and pontificating about the bat brain and what it must be like to ‘see’ in sound as if we’ve uncovered something profound. The experiential disparities between two identical twins must seem pretty profound if you’re one of those twins.

Then there’s the question of how I got this way in the first place. There is strong evidence that ADHD is hereditary (anyone who knew my dad could attest to this), but like all hereditary attributes, there is likely an environmental factor. So perhaps something happened to me at the age of 6 or 7 that took what was thus far destined to be normal brain and made it get all mixed-up. It’s plausible and there’s some evidence to back it up. But the possibility that my brain was normal at 6 and then went through some change, from a subjective viewpoint, is neither here nor there. The meds may stabilise my moment to moment experience, but my brain is still structured how it is, they’re not turning back the clock, just adjusting the time a little. No amount of drugs and conditioning and browbeating and guilt and shame is going to change that. If I did manage to change my brain (for better or worse) it is my current baseline that I start from, not that 6 year old brain. The person I could have become, if ADHD were purely environmental, never existed and never can exist. So why concern myself with him? 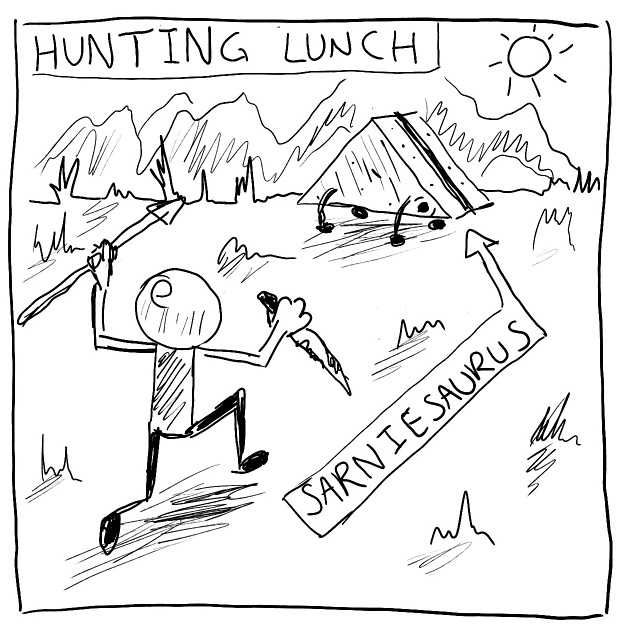 It’s further arguable that I didn’t get to any state. It’s unlikely that neolithic man had a specific label for people like me. In fact, this is a 20th century disorder and some would argue is only as widespread as it is, from a diagnostic perspective, because the hyper-connected, always-on 21st century world draws it out and exacerbates it. People with my wiring probably had a great time of it roaming the plains as part of a hunting party, only to be stifled by the advent of agricultural society with its relentless monotony and structure. That my brain struggles with the constant noise-dressed-up-as-signal that permeates every corner and crevice of contemporary existence says more about the external world which I inhabit, than my internal state and any perceived problem with it. But even before we all got plugged into the matrix, society was torturing the ADHD brain. Schools are a classic example of this. ADHD people thrive on participatory, practical, visual and direct methods of teaching. “Over there, that’s a gazelle, here’s a spear and a knife, watch this and follow!” The ideological obsession with teaching via structure, theory and rote learning is not particularly great for kids with normal wiring, but it is a special form of torture for the ADHD personality. These kids are climbing the walls because society base-lined on a teaching paradigm that is the antithesis of what ADHD kids need. To add insult to injury, lack of conformity, outspokenness, high levels of energy, and impulsiveness, all very ADHD behaviours, amount to nothing less than aberrant misbehaviour and are punished with an iron fist and worse, exclusion (let me give you a clue here, ADHD kids thrive on human interaction, so what exactly are you trying to achieve?). These behaviours are the bedrock of creativity and invention, and ADHD kids are frequently the provide the energy that is the antidote to the grey, monotonous reality of the modern classroom environment. These behaviours are actively (if often unknowingly) suppressed in the modern educational system. The system is stacked against people like me. I failed GCSE English twice. I would produce intricate works of creativity and maturity, and be cut down because of poor grammar, handwriting and spelling, things that are classic tripping-up points for ADHD kids (and which I still struggle with). Do I write like someone who is poor with the English language? (yes, there are probably typos and errors in this very piece, it comes with the territory, I assume that you can find it in your heart to forgive me?) For years I assumed I just couldn’t do ‘writing’. It took me years longer to realise the inverse was true. In that sense, it is not me but the system that has the problem. 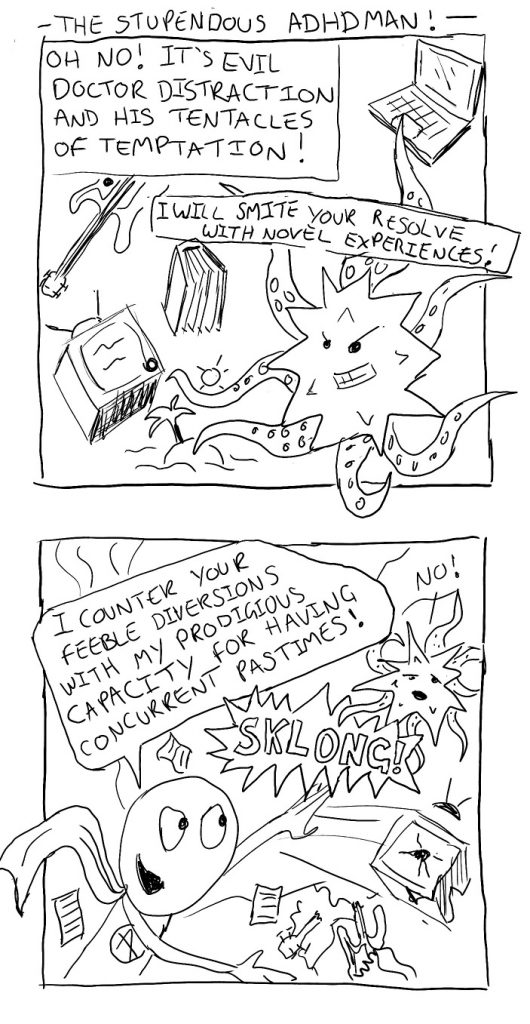 And this is where things bottom out. I am not ADHD, in the same sense ADHD is not me. I do not define this condition and it does not define me. It is just a collection of attributes that a section of the population share to a highly consistent degree. These attributes can be highly beneficial in some situations, and profoundly detrimental in others. Unfortunately the situations in which it is detrimental are extremely common in the modern world. Behaviours attributable to ADHD can’t be compared to a bad mood as the result of a hangover. This disorder, for better or for worse, pervades every part of my internal and external persona. There is no “it and me”, there is just me. I have achieved the things that I have both despite, and because of my allegedly faulty wiring. Put another way, despite modern society’s tendency the frustrate and impede me, I still stand tall. I still manage. I still succeed. Despite the fact that for me it takes harder work and greater levels perseverance, and emotional energy than it does for most people. That I can be proud of. I have a superpower that most people don’t, it’s just hard to use sometimes. However, I am one of the lucky ones, most people with ADHD are considerably less fortunate.

Since I always assumed, in good faith, that I took various actions because I meant to, and still maintain the self-delusion of free-will, all the ADHD diagnosis does is give me is a framework for explanation – many behaviours that seemed out of the ordinary now make more sense. It wasn’t that I just wasn’t trying hard enough to fit in, or to succeed, or to pay attention or to follow through, but rather I am wired differently from most other people. This is me, all of it, for all the good, bad and bat-shit crazy.

So where do I and end and where does ADHD begin? The ADHD starts where I start and ends where I end. ADHD is dead, long live ADHD.

One Reply to “Where I End and ADHD Begins”